Creative Comeback London 2020 – Helping me get my creative confidence back

In March 2020, I travelled to London just before the first COVID lockdown and took part in Creative Comeback. An initiative run by Creative Equals, to support people who have had a break from their creative career. My reason for a break, Breast Cancer. My confidence had taken a knock. I was trying to figure out what I wanted to do with my life? Did I want to get back into the creative work space? This course offered me the opportunity to dip my toe in the water.

It was an intensive two weeks, working with a brilliant bunch of inspiring and talented people, we collaborated during workshops, learned from creative leaders in the field and gained experience on placements in some of London’s top creative agencies. The CC2020 gang are still in contact and supporting each other. No matter our reasons for being there, we were all grappling with that confidence block. This course helped us all figure stuff out, for me I realised wanted to pursue a masters and focus on my desire to explore the field of research.

World Vegan Day is an annual event celebrated by vegans around the world every 1 November. The claimed benefits of veganism for humans and the natural environment are celebrated through
activities such as setting up stalls, hosting potlucks, and planting memorial trees. The event was established in 1994 by Louise Wallis, then Chair of The Vegan Society in the United Kingdom, to commemorate the 50th anniversary of the founding of the organisation and the coining of the terms “vegan” and “veganism”.

WHAT
Create noise and engagement to commemorate World Vegan Day.

HOW
You can come up with ad concepts, write, draw, design or respond in whatever format you think best shows off your own creative skills. We’re not expecting reams of work so please don’t spend more than a day to come up with your response.

Everyone – we are inclusive!

How do you make Veganism accessible to everyone?

The general public can view Vegans as being very serious with no sense of humour, which is a complete stereotype and misrepresentation. Vegans are passionate about their life choices but that does not mean they don’t have a sense of humour. I wanted to move away from the very explicit goveganworld advertising which the general public associate with vegan marketing. I felt the best way to break through the barrier of very serious and far out of reach was to use humour, it’s inclusive and reaches the masses. I researched vegan jokes and started to play around with a few ideas. The jokes are cheesy and naff. I liked this, I mean everyone likes a good cheesy joke, even a vegan! I explored this play on words.

A comedy gig is the kind of thing that non vegans would go to even if they didn’t know any vegan people. These non vegans are really the people the campaign is trying to reach. The concept developed into a comedy night hosted by The Vegan Society to celebrate World Vegan Day. The comedians would be vegan, stand up for animals, be passionate about the environment – Russell Brand is a very prominent example. I chose him as the headline act. I figured go big or go home! The idea is that the event promotes veganism as a socially acceptable and accessible concept. It shows that even being vegan you can still go out and do fun stuff and build community.

I sometimes think a vegan diet seems so far out of reach or understanding to people who are not Vegans. World Vegan Day is a great opportunity to educate how easy it can
be to change your diet. We all need to try to make adjustments by even 10% in our diet to make a difference, these changes can be made in a series of steps in order to achieve an end goal.

All the food and drink supplied at the gig would be 100% vegan to allows people to taste delicious vegan food and beverages. The Vegan Society could set up stalls allowing attendees to ask questions they may have around veganism and help educate them in how to go Vegan.

We Love A Bit Of Cheese.
It’s just always the type cheese that everyone else is into!

I have created four posters based on the above rational, it could be easily expanded to include more jokes. You could take over all the advertising slots on tube train carriages with a full range of cheesy jokes and content from this campaign!! It could be easily transferred to social media channels. 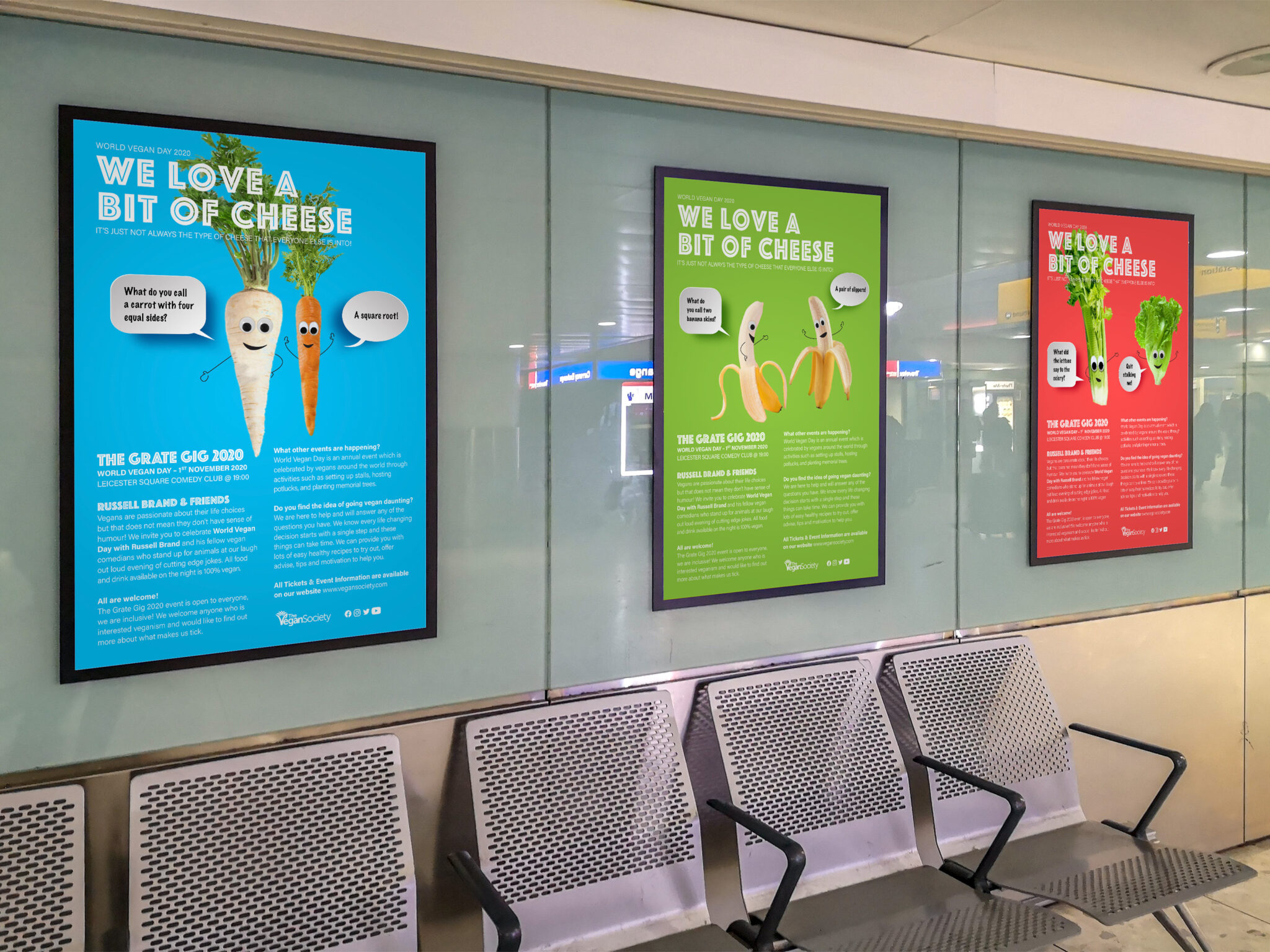 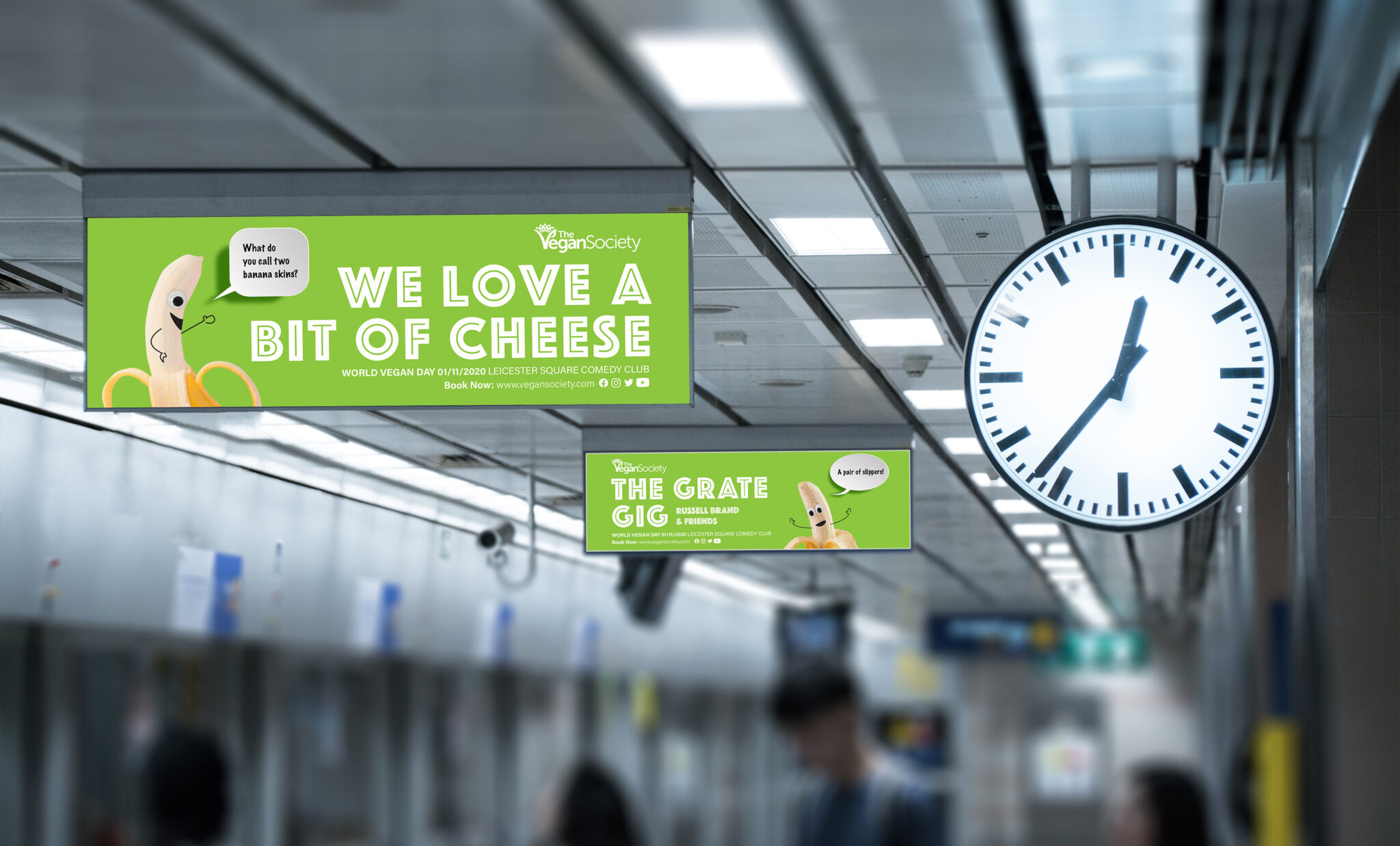